The PepArray™ technology involves in situ (on chip) high density peptide synthesis and multiplex protein assays carried out in a microfluidic picoliter scale microarray.  These are custom synthesized peptide microarrays (see PepArray™ technology) containing 4K-30K features.  Each feature is actually a miniature (37-270 pl) reaction chamber.  We do not spot pre-synthesized peptides onto the array; instead, each peptide is synthesized in parallel in an individual reaction chamber.  Not only can we synthesize a unique sequence in each chamber but our unique synthesis chemistry also makes it possible for us to vary the density of peptide synthesized in each chamber creating peptide concentration gradient plates for measuring protein dissociation constants (Kd) in a way similar to 96 or 384 well titer plates.  Hundreds of Kd values are measured simultaneously on our PepArrays™.

Illustration of an array of molecules of varied densities. The first row indicates the position of the molecular sites and the second row indicates the density variation by how many fold, with 1 being the original density when no dilution or concentration synthesis is used. 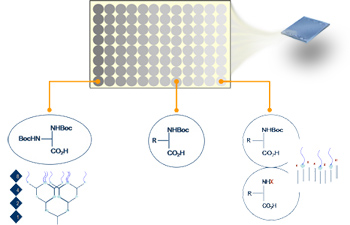 A 4K feature microarray can generate the same amount of data equivalent to that of 40 conventional 96-well microtiter plates! 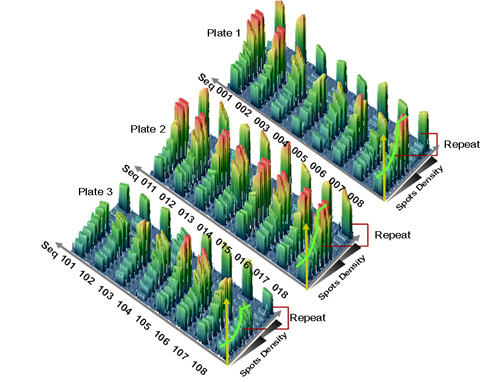 In situ Synthesis Strategy for Creation of Density Variation Spots

The key to creation of picoliter scale titer microarrays is the µParaflo® microfluidics technology. One of the components of this technology is an innovative PGA (photo-generated acid) chemistry which enables on-chip synthesis of custom peptide sequences without the need for specially protected amino acid building blocks. Typically, on surface synthesis of peptides requires amino acids with specialized photolabile protecting groups that can be directly deprotected with a light source in order to direct synthesis at addressable location on the surface.  In contrast, our chemistry makes use of a PGA precursor reagent (which decomposes to form acid after light irradiation) to deprotect standard acid labile t-Boc protected amino acids and amino acid analogs.

It is the use of these amino acid analogs that enables the density variation.

PepArray™ technology (including picoliter scale titer plates) is made available to you as a service for multiple applications. Send us your sample(s) and we will perform the experiments you desire in our lab and send you back a detailed data report.