Figure 1 shows a histogram of CV from six individual assays using a total RNA sample of human kidney tissue.  A CV peak value of 8% and a median value of 11% were measured.  These numbers indicate a low system noise that is more than sufficient to detect a 1.5-fold change that is commonly used as a threshold number for indicating significant biological differentiation.

Figure 1. A CV histogram based on six individual assays using a total RNA sample of human kidney tissue.  Data are collected from average signal intensities above 32.

Our microRNA detection dynamic range is no less than 3.5 logs and the lower detection limit is less than 10 attomole.  These numbers are derived by using an experimental design method called the Latin Square Test.

Figure 2. The lower detection limit is determined based on a p-value calculation using the signals of Cy3 and Cy5 channels.  A p-value cut-off of 0.04 is used.

Even with a single-base mismatch (1MM) in a detection probe most signal drops by more than 30 fold and a perfect match (PM) to 1MM ratio of more than 100 fold is achieved.

The high assay specificity is illustrated in an extensive test for assessing the specificities of all mouse microRNA probes.  On a microRNA array chip, for each microRNA transcript, in addition to a perfect match probe, three mismatch probes containing one, two and three substitution mismatches, respectively, were added.

The figure below is a section of the array image showing binding intensities of all four types of probes.  The results show the majority of the 1MM binding signals drop by more than 30 fold; all except two of the 2MM and all 3MM signals fall into the background level.

Through the use of the µParaflo® microfluidic chip technology and design of probes containing proprietary chemical modifications, we can achieve very uniform hybridization that is extremely reproducible.  Much more reproducible than is possible with a spotted array. 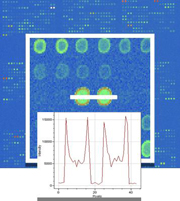 Spotted Array from a reputable facility 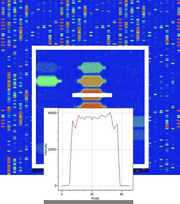 The figure below illustrates the intra- and inter-chip reliability of our µParaflo® microarrays.

We performed a “color reversal” experiment using mouse brain and mouse thymus RNA samples purchased from Ambion.  The results are compared with QPCR data for the same two RNA samples, also purchased from Ambion, published by Applied Biosystems (ABI)*. The comparison data includes all 12 microRNA transcripts published by ABI without any selective picking of the transcripts. As shown in the bar graphs below, the relative intensities of different microRNA transcripts of our array data are in excellent agreement with ABI’s QPCR results.